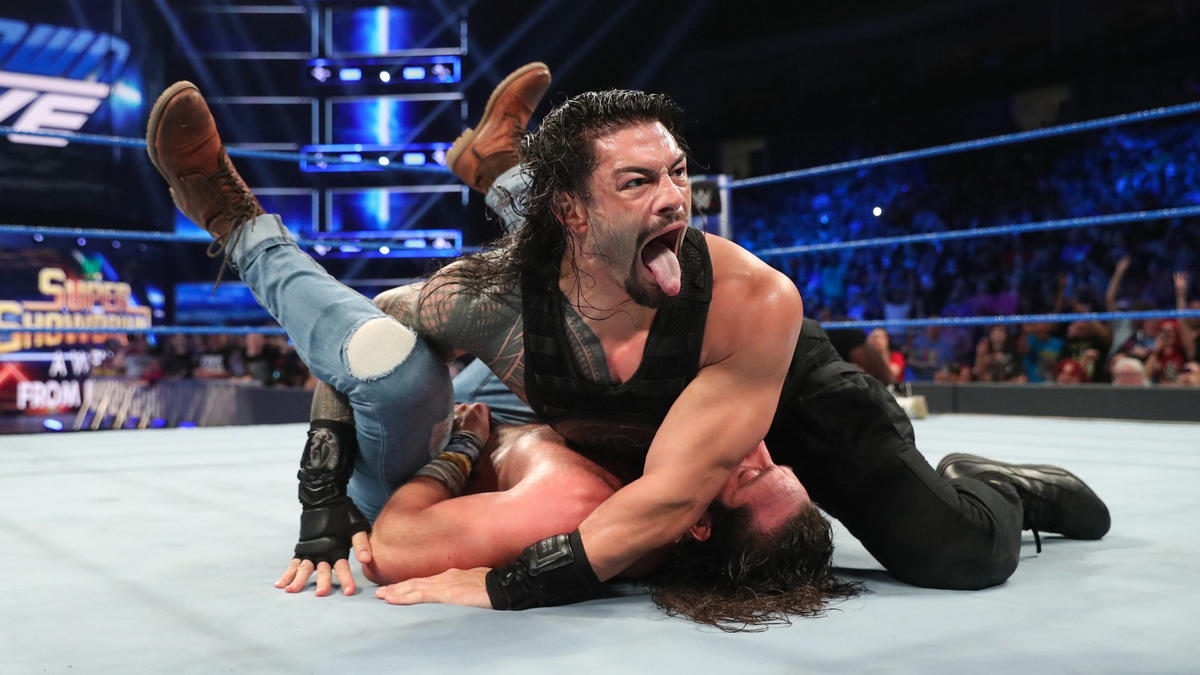 Tulsa,OK Roman Reigns and R-Truth vs. Drew McIntyre and Elias

We go to the ring and out comes Roman Reigns for tonight’s main event. Back to commercial.

Back from the break and we get a replay of last night’s “Firefly Fun House” segment on RAW where Bray Wyatt revealed the name for his new bizarre, masked persona – The Fiend. He also walked upside down to close the segment. We go back to the ring and Reigns waits as R-Truth makes his way out, selling the attack from earlier. WWE 24/7 Champion Elias and Drew McIntyre suddenly attack from behind. Shane McMahon is with them. Reigns comes to the ramp to make the save for Truth. Reigns sends Drew into the ring post. Reigns rocks Elias into the barrier.

Reigns brings Elias into the ring and the bell rings. Reigns mounts Elias in the corner with right hands as fans count along. Shane gets on the apron to distract Reigns, allowing Elias to turn it around. Drew tags in and goes to work on Reigns in the corner now. Drew stomps on Reigns while he’s down.

Drew keeps Reigns down and covers for a 2 count. Elias tags back in and keeps Reigns grounded as Shane watches from ringside. Reigns ends up catching Elias with a Samoan Drop. Drew tags in as Truth also tags in. Truth rocks Elias on the apron but turns around to a Glasgow Kiss headbutt from Drew. Drew sends Truth to the floor and works him over. Drew slams Truth’s back over the edge of the apron. Back to commercial.

Back from the break and Truth rocks Elias in the middle of the ring. They go at it and Elias lands a clothesline. Shane dances around at ringside. Drew tags in for a quick double team. Drew works Truth over in the corner and tosses him overhead across the ring for a 2 count.

Drew keeps the attack going on Truth as Reigns watches from the apron. Elias comes back in for a double team on Drew. Elias keeps Truth down in the middle of the ring and rocks him back into the corner. Truth tries to fight out of the corner but they keep him there with Drew tagging back in. Drew drops Truth with a big chop. Drew keeps Truth grounded on the mat and works him over there now. Drew sends Truth back to their corner and pounds on him with strikes. Elias joins in as the referee warns them. Elias runs into the ring post as Truth moves. Truth sends Drew over the top rope to the floor as fans pop for the comeback.

Truth crawls to the corner as Reigns waits. Reigns gets the hot tag and fans pop for him. Reigns unloads on Elias and levels him with a clothesline. Reigns rocks Drew off the apron. Reigns with big shots to Elias in the corner as fans count along with him. Reigns with a big right hand. Reigns rocks Drew off the apron again, with a Superman Punch this time. Elias gets sent off the apron to the floor. Reigns runs around and hits a Drive By on Elias for a pop. Shane comes from behind but Reigns nails him in the face with a right hand. Drew comes with a Claymore attempt on Reigns but misses. Shane retreats now. Reigns is back in the ring with Elias now. Reigns delivers a big Spear and covers for the pin to win.

– After the match, Reigns’ music hits as he checks on Truth in the corner. Reigns hits another Spear on Elias after the match. Truth crawls over and covers Elias to take back the WWE 24/7 Title.

– After the pin, Reigns stands tall with Truth and raises his arm in the air as Truth’s music hits. Shane and McIntyre look on from the stage, talking trash as Reigns looks out with Truth from the ring. SmackDown goes off the air with Reigns and Truth standing tall.