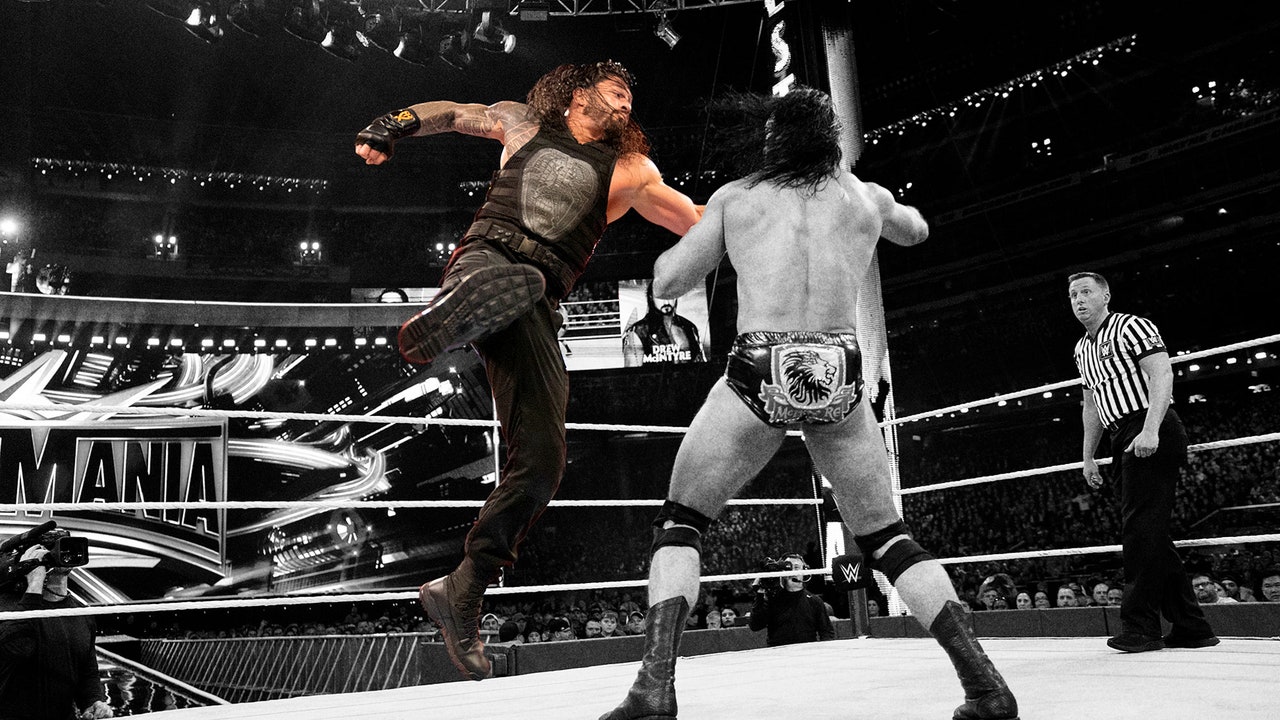 Real-Life Diet is a series in which GQ talks to athletes, celebrities, and everyone in-between about their diets and exercise routines: what’s worked, what hasn’t, and where they’re still improving. Keep in mind, what works for them might not necessarily be healthy for you.

For years, Roman Reigns was the WWE’s Next Big Star. He had the looks, the in-ring skills, and a preternatural ability to divide crowds on a level previously only achieved by John Cena. But shortly after Reigns cemented himself at the top of his profession, taking the Universal Championship from Brock Lesnar last August, he was forced to step away from the squared circle and relinquish his title. As Reigns announced on live television, he had been diagnosed with leukemia for the second time.

Nobody knew what this meant for Reigns’ future as a professional wrestler, least of all Reigns himself. So when he re-emerged on Monday Night Raw in late February—just four months after he revealed his diagnosis—the wrestling world was stunned. Even more surprising: Reigns declared that he was officially in remission.

If you thought he would ease his way back, you’d be sorely mistaken. On top of traveling the world full-time with WWE, and headlining SmackDown Live every Tuesday night, he somehow found the time to film Hobbs & Shaw alongside his cousin, Dwayne “The Rock” Johnson. I recently caught up with Reigns to find out how he manages to maintain that schedule while staying in ring shape following a battle with cancer.

GQ: In 2015, you told me that staying on top of your nutrition game, not finding the time to work out, was the most difficult part about being on the road with WWE. Is that still true today?

Roman Reigns: It can be. As a whole, our locker room has gotten a lot smarter. We’ve really moved to meal plans now. You see a lot of guys carrying those Yeti coolers. I don’t enjoy lugging around a big cooler pack all the time, so that’s not something I do often. I still go about getting my meals from restaurants in whatever town I’m in.

I know Chipotle used to be a popular go-to for the WWE roster. Is that one of your frequent spots for a meal?

A lot of guys will still hit up Chipotle, because it’s so convenient. I don’t want to knock the company or anything, but I don’t know if the quality is quite what it was. You can definitely taste it. It’s a lot higher in sodium, I would say, over the past five years. But it’s still a lot better than a cheeseburger and french fries. It’s better than most options but probably not the best thing for you, you know? But when you’re working out twice a day, sometimes you can get away with a little bit of it here and there.

Say you’re on the road. You’ve got to travel, train at the gym, make it to the arena on time for that night’s show, then travel to the next town for the next one. Break it down for me—in a perfect scenario, when and what are you eating?

You can always help yourself if you book a better hotel. Some guys will try to save some money on the road and book a cheaper hotel. I’ll spend a little more so that I have a good restaurant. If you have a very specific order, the restaurants will usually make it. You can even get two or three meals in advance, and you’re good to go. You can put that tag on the door and have your breakfast order coming at the time you want it at.

I’ll get six to 10 eggs in the morning, and maybe a little bit of bacon or sausage. Then I train and get a protein shake, which will usually make me feel full. About an hour or so later, I’ll try to get another meal in, and that one will be pretty protein-heavy. Sometimes I’ll have one more protein shake. Late at night on the road, you can’t be picky. Your options are limited, so you just have to make that work. That is where the meal plans are nice to have.

Have you ever considered switching to a meal plan, just to take the thinking out of it?

When I’m at home, actually, meal planning is something I always do. We have good friends at this company, Nutrition Solutions, and they take good care of us. They’re located in Tampa, so it really works out conveniently for my meals when I’m home. It allows me to knock out my meals at home without worrying about going out and eating. It doesn’t take me away from the kids, so I get to spend as much time with my family is possible. I just unwrap it, put it in the microwave, and eat it. My diet is pretty bare bones. I don’t do a lot of different sauces or seasonings. If you saw it, it’s protein, carbs, and greens for digestion. It’s pretty simple, and I try to emulate that on the road.

You’ve been very public about your battle with leukemia. How did your diagnosis impact your diet?

Right from the get-go, I had to take it a lot easier on my digestive system, because the medication I’m on can be pretty harsh on your liver and stomach. I had to really take care of myself and make sure I wasn’t overloading on protein like guys who are trying to gain muscle typically do. And I had to be picky with the proteins I did take in. Red meat takes a lot longer to digest, and it’s a lot more work on your liver. Also shellfish—my uric acid levels can rise really quickly, so I can’t go crazy on shellfish anymore. I can’t have those big crab leg dinners. The “king meals” is what we call them. I’ve had to really focus on more chicken and lighter fish.

There were a lot of other things I had to address. I had to increase my water intake. I really had to cut down on alcohol. Like anything else, it’s portion control, and being conscious, so we know that I’m not overworking my body.

You were previously diagnosed with leukemia in 2007. Were there any major changes when it came to how you handled your diet between then and your diagnosis this past year?

Back then, I was still playing football, and I was only 22 years old, so my body was resilient. Thank God I managed to take care of myself, but at 22 years old, you can get in a car wreck, run out of it, and go swimming across the channel. So I was still able to maintain my weight and train like an athlete and continue to pack on some weight. But now I’m 34. I’m a different human. I just can’t manage everything like I used to. I don’t have the same resiliency that I did when I was 22. My body didn’t bounce back, and the recovery is not the same. It’s a whole different process now, and I’m working a different job, in a different place, with a different type of athletics.

You mention maintaining your weight while undergoing treatment the first time you battled leukemia. Was that more of a struggle this time around? I know when my grandmother was getting chemotherapy for cancer, her appetite completely dissolved.

It’s a little different for me and those with blood cancers. We are very fortunate that we have medications referred to as oral chemotherapy. So what your grandmother was probably going through is far harsher on the system and your body. But there are similar effects when taking these medications. I’ve been on the road now for almost three weeks, and just yesterday I didn’t have an appetite. I was kind of nauseous for the majority of the day. There are some days that are struggles, and some days where it curbs your appetite and you don’t want to eat because you have that nauseous feeling.

Before all this happened, I was maxing myself out and working as hard as I could. This has given me a new perspective. Sometimes you have to be smarter and pull yourself back, and that is what I’ve had to do with my diet and my training. Instead of pushing towards a goal relentlessly, I have to listen to my body, see how I’m feeling and what my energy levels are along the way.

This interview has been edited and condensed for clarity.