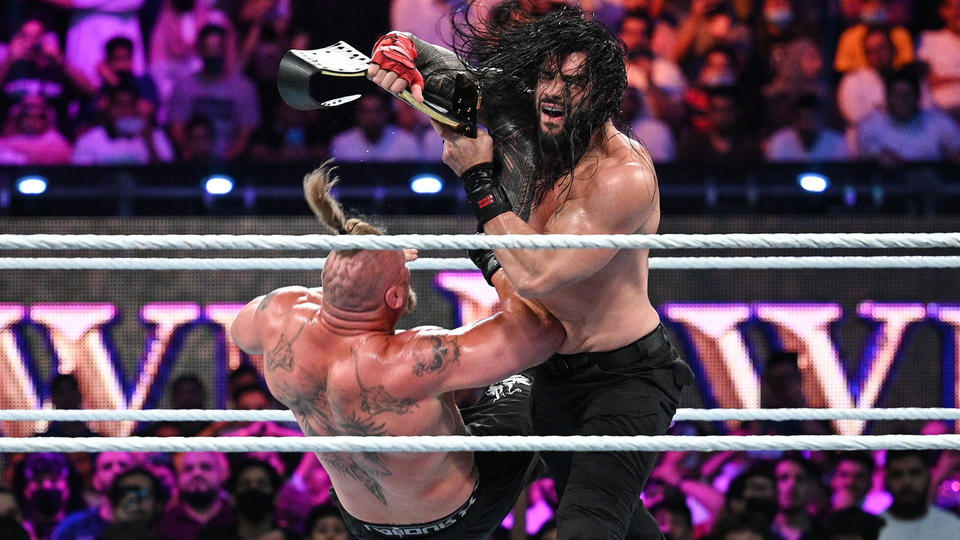 Brock Lesnar looked for a suplex early and often, but the newly-crowned “Suplexorcist” Roman Reigns countered each time, hanging on to the ropes before landing some brutal elbows. Reigns pulled Lesnar out of the ring, bouncing his face off the ring post and keeping The Beast at bay with a Superman Punch and an unorthodox dive over the top rope to send Lesnar crashing into the barricade.

Lesnar got back into the ring but was met by a Spear from Roman for a near-fall. After another Superman Punch, Reigns went for another Spear, but this time Lesnar rolled out of the way to send The Head of the Table shoulder-first into the ring post.

The Beast took advantage of a stunned Reigns with a pair of suplexes followed by an F-5 for a two-count on The Tribal Chief. Lesnar looked to end it with another F-5, but Reigns’ leg clocked the referee in the head as Lesnar dropped the titleholder.

Lesnar went for the cover and seemingly had the win in hand until he noticed the unconscious referee, and Reigns caught a distracted and frustrated Lesnar off guard with a Spear. As both men lay flat on the mat looking to Paul Heyman for help, a seemingly torn Heyman threw the championship in between the two Superstars, yelling simply, “You know what to do.”

The tug-of-war commenced with Lesnar snatching the title away from Reigns only to turn into a pair of superkicks by The Usos. Reigns then battered Lesnar with the WWE Championship, covering him for the win.