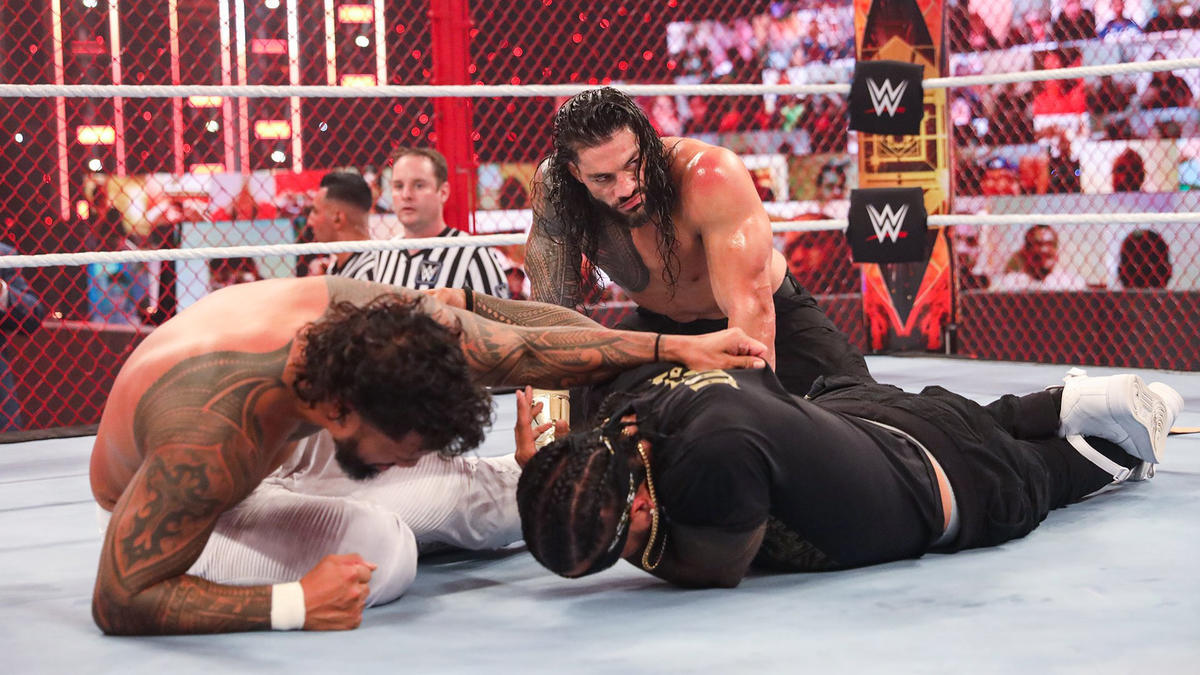 Kickoff pre-show
The 2020 WWE Hell In a Cell Kickoff pre-show opens up from the WWE ThunderDome inside the Amway Center in Orlando, Florida. Charly Caruso welcomes us. She’s joined on the panel by Peter Rosenberg and three WWE Hall of Famers – Booker T, Jerry Lawler and Jeff Jarrett, making his Kickoff panel debut.

We go backstage to Kayla Braxton and Paul Heyman. She asks about tonight’s “I Quit!” Hell In a Cell match. Heyman tells Kayla to do herself a professional favor and take the hype out of her voice. He goes on about Jey Uso vs. WWE Universal Champion Roman Reigns, staring Kayla down and talking about how Reigns will win. Heyman walks off and we go to a break.

“I Quit” Hell In a Cell Match for the WWE Universal Title: Jey Uso vs. Roman Reigns

We go to Hell In a Cell as Jey Uso makes his way out for his first-ever singles match inside the structure. Jey is wearing a custom lei tonight. The announcers say the elaborate lei represents family, celebration, the love he has for his cousin, and more. Fans cheer Uso on as he enters the Cell. Out next comes WWE Universal Champion Roman Reigns for tonight’s opener, with Paul Heyman right behind him. The boos get louder as Reigns stops on the stage and stares down to the ring. Reigns raises the title as the pyro explodes. Reigns marches down the ramp and stops to look up at the Cell. Cole shows us a clip from Heyman’s brief Kickoff pre-show interview with McKenzie Mitchell, talking about the consequences that Uso will face when he loses. We get formal ring introductions from Greg Hamilton.

The bell rings as Reigns shakes his head at Uso. They size each other up and talk trash, getting louder with each other. They aggressively lock up. Reigns drops Uso with a shoulder block. Reigns rocks Uso with a big right hand. Reigns keeps talking trash and nails a suplex in the middle of the ring. Reigns sends Uso into the turnbuckles and is taking his time now. Reigns with a big blow in the corner, sending Jey to the mat.

Reigns with another stiff clothesline, stalking Jey. Uso ends up nailing a knee and a kick to the gut to start mounting offense. Uso rocks Reigns to the floor. Uso runs the ropes and nails a dive out, sending Reigns into the steel. Uso may have hurt himself. They bring it back in and Uso clotheslines Reigns right back to the floor. Uso follows up with another dive to send Reigns into the red steel again. Uso uses the steel as a weapon again, dropping Reigns on the floor. Uso yells at Reigns some more and sends him head-first back into the steel wall.

Jey is fired up now as he brings Reigns back into the ring. Jey waits for Reigns to get up in the corner. Jey yells out and charges but Reigns meets him in the middle of the ring with a big Spear. Fans boo as Reigns sits up on his knees, Uso still down. Reigns ends up going to ringside and grabs a steel chair from under the ring. Uso gets up and runs the ropes, dropkicking Reigns through the ropes. Uso runs the ropes again for a dive but Reigns meets him at the ropes with a big right hand. Reigns comes back in the ring and delivers a Spear. Reigns taunts Uso while he’s down, taking his time and playing to the crowd, pointing down at his cousin.

Reigns runs for another Spear but Uso kicks him, then superkicks him to the mat. Uso goes to the top and hits the big Uso Splash for a pop. Jey is looking for the win. The referee checks on Reigns but he’s not giving up. Reigns takes another big Uso Splash but Reigns still won’t say he quits.

Uso brings a leather strap into the ring now for a pop. Heyman pleads but Uso yells back at him. Heyman asks Uso to please not. Uso smacks Reins with the strap while he’s down and declares that he’s going to “whip the dog s–t” out of his cousin. Uso with a third strap strike as Heyman looks on. Reigns nails another big Spear out of nowhere and the boos start up. Uso yells out that he can’t breathe. The referee checks on him but he won’t quit. Uso says he can’t breathe again. The referee asks Uso but he refuses to quit.

Reigns grabs the strap now and yells at Uso while whipping him around the ring. Reigns ties the strap to Jey’s wrist. Reigns with another big strap shot while Uso is down, causing him to roll around in pain as The Tribal Chief smiles. Reigns pulls the strap while it’s hooked to Uso’s wrist. Uso gives in and charges at Reigns with a big strike. Reigns with a forearm. Uso fires right back and decks him in the middle of the ring. They trade shots now. Uso with a back kick. Reigns goes for the Superman Punch but Uso counters with the strap. Uso mounts Reigns’ back on the mat now and wraps the strap around his head and neck, rag-dolling him as the referee asks Reigns if he quits. Reigns starts fading out but he’s not quitting. Reigns powers up but Uso is still on his back, tightening the strap around the neck. Uso is off Reigns now but Reigns is out.

Reigns is barely moving on thee mat now. The Network feed cuts out but we come back to Uso waiting for him to get up in the corner, steel chair in hand. Uso goes to swing the chair but Reigns leaps up with a Superman Punch. Reigns applies the Guillotine submission in the middle of the ring now. The referee checks on Uso but he hangs on. Heyman yells at Uso to quit. They go to the mat with Uso fading but the hold is broken and Uso refuses to quit. The referee informs Reigns that Uso won’t quit. Reigns is a bit frustrated now. He yells at Uso to say the words.

Reigns kneels down with more words for his cousin. The referee keeps telling Uso that all he has to do is say the words and quit, and it’s coming off as a bit annoying. Reigns drags Uso to the corner by his arm. Reigns positions Uso to where his head is hanging off the edge of the apron, looking up at the roof of the Cell. Reigns runs and nails a Drive By to the side of the head. The referee keeps on telling Uso he can end it right here. Reigns grabs half of the steel ring steps and positions them next to Uso’s head on the edge of the apron. Reigns backs up for another Drive By and nails it, sending the steps into Uso’s head, into the ring post. The referee gets back in Uso’s face and goes on and on about how he can end it right here if Uso says he quits.

Reigns seems a bit surprised at Uso hanging on. The referee tells Reigns he has to call the match but Reigns isn’t having that. Reigns tosses the referee out of the ring and says no one is stopping the match. The other referee comes in the ring but retreats as Reigns turns to him. Reigns turns his attention back to Uso on the mat but WWE Producers Adam Pearce and Pat Buck are in the ring now, pleading with Reigns, telling him this is enough. Reigns shuts the Cell door and says this isn’t over. Reigns tries to throw half of the steel steps in the ring but they hit the ropes and fall back to the floor. He finally gets the steps in the ring. Reigns chases the WWE officials out of the ring now. Producers and referees watch from ringside inside the Cell. Reigns puts the steps over Uso’s head, fitting the groove of the steps right over his head. Reigns yells down at him about all he had to do was acknowledge him as Tribal Chief. Reigns goes on and on, saying there is no going back from this too far. Uso is barely moving. Reigns picks the steps up and raises them high above his head, ready to slam them down on Jey’s face. Jimmy Uso suddenly rushes into the ring and covers his brother. Jimmy pleads with Reigns and asks him what he’s doing.

An emotional Jimmy asks Reigns what he’s thinking, telling him that whatever he’s going through they can work on together. Jimmy tells Reigns that this is Josh laying here, using Jey’s real name. Jimmy tells Reigns that they’ve got him, and always have, that this is not the answer. Reigns is emotional now, crying while sitting on the mat next to his cousins. Jimmy continues to try and reason with Reigns. Jimmy and Reigns grab fists now and embrace, saying they love each other. Reigns suddenly pulls Jimmy down into a chokehold as the boos get louder. Jey barely is moving but he tries to pull Jimmy free from Reigns’ grasp. This causes Jey to finally quit, just to end the carnage and save his brother.

– After the match, the bell rings and Reigns finally breaks the hold. The music hits as Reigns stands tall, now with a serious look on his face, no longer emotional. The boos get louder as the Cell is raised back up. Heyman enters the ring with the WWE Universal Title belt. Jimmy checks on Jey, both are now sitting up on the mat but emotional, and angry. Reigns looks down at them and tells them he loves them. Reigns marches up the ramp as The Usos stare him down from the ring. We see WWE Hall of Famers Afa and Sika on the stage, Reigns’ uncle and father. They hug Reigns as Heyman watches from the side. Reigns gets the title from Heyman and stands between his uncle and father now. Reigns raises the title in the air as the boos get louder. The Usos watch from the ring while Reigns stares them down to end the segment.