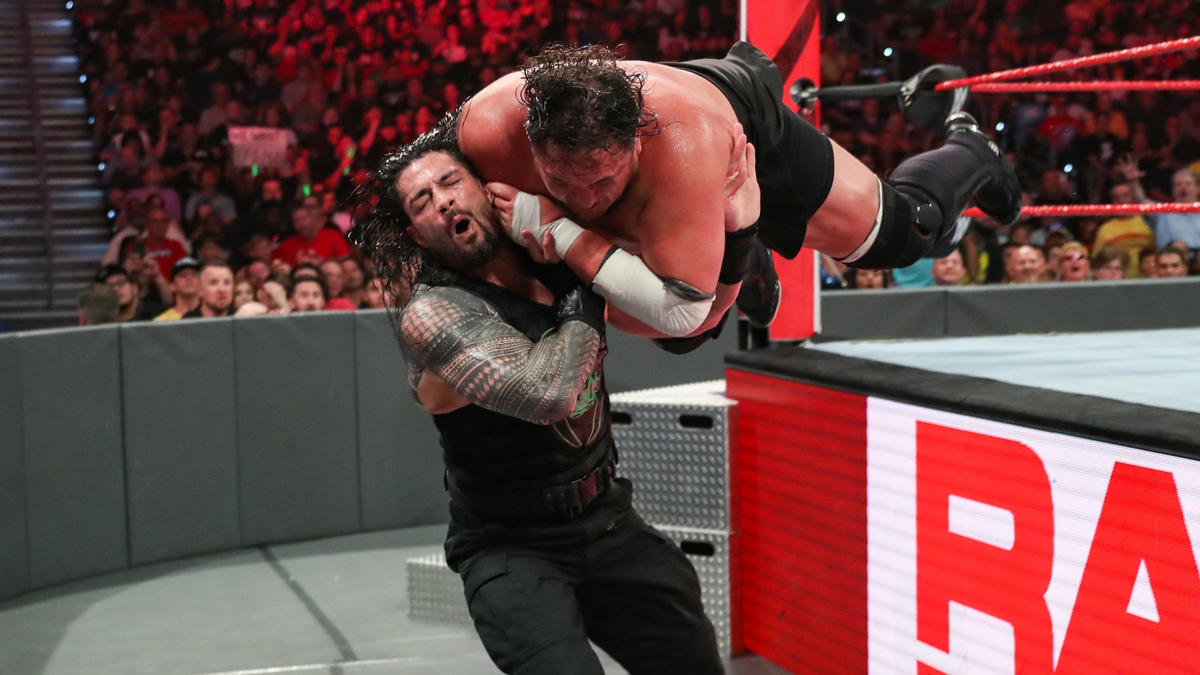 We go to the ring and out comes Samoa Joe. Joe isn’t happy about the RAW Reunion special. Joe says these shows are a plague to WWE. He goes on and says instead of his show of violence tonight in the ring, we got The Usos with their daddy, spitting limericks at John Cena. Joe calls it embarrassing. Joe is surprised they didn’t do more pandering, more dancing and passing out Stinkfaces.

The music interrupts and outcomes Roman Reigns to a pop. Reigns takes his time getting to the ring. They stare each other down. Reigns says if Joe has something to say about his family, then say it. Joe says he’s already said it. Reigns says Joe is from the same island so he knows what happens next. Reigns steps to him. Joe does know, but before they get into this… Joe swings a cheap shot but Reigns fights him off. Joe goes for the eyes and drives Reigns into the ring post, sending him out. Joe follows Reigns to the floor and launches him into the barrier. Joe with strikes and a headbutt as he continues to dominate Reigns around the ringside area and back into the ring. Joe knocks Reigns back out of the ring with a headbutt. They bring it back in but Reigns knocks Joe off the apron with a Superman Punch for a pop.

Reigns stands tall in the ring as Joe looks on from the floor. Joe acts like he’s going back in but he backs off. Fans chant for Reigns. Joe talks more trash and says he’s not doing anything for these people tonight. Fans boo as he walks away. Reigns apologizes to the fans and says not all Samoans are cowards. Joe stops on the ramp and says we’re about to see a Samoan get put out permanently tonight. Joe asks Reigns if he wants the match and he does. Joe says he’s got it. Joe tosses the mic and heads back to the ringside area. A referee enters the ring. We go back to commercial.

Back from the break and the match begins. Roman Reigns and Samoa Joe go back and forth to start. Joe quickly goes for Reigns’ injured arm and turns it around.

Joe works Reigns over for several minutes, beating him around and focusing on the arm and shoulder. Reigns tries to mount offense but Joe dominates. Reigns ends up going down hard on the outside. Joe hits the ropes and launches himself out with a suicide dive, taking Reigns back down on the floor. Joe recovers and looks down at Reigns as the referee counts.

They bring it back in and Joe sends Reigns to the floor again. Joe runs and leaps out but Reigns is nowhere to be found. Reigns levels Joe and brings him back in the ring. Reigns with a big right hand off the ropes as fans start to rally for him. Reigns unloads in the corner with clotheslines as fans count along with him. Reigns drops Joe with a kick to the face. Fans pop for Reigns as he stands tall. Reigns goes for a Superman Punch but Joe catches him with an inverted Atomic Drop, a kick to the face and a senton in the middle of the ring for a close 2 count. Joe is surprised.

Joe picks Reigns up and applies the Coquina Clutch in the middle of the ring. Reigns resists and they tumble. Reigns gets the upper hand and ends up hitting a big Spear for the pin to win.

– After the match, Reigns stands tall and has his arm raised as the music hits. We go to replays. Reigns continues his celebration and poses for the fans.