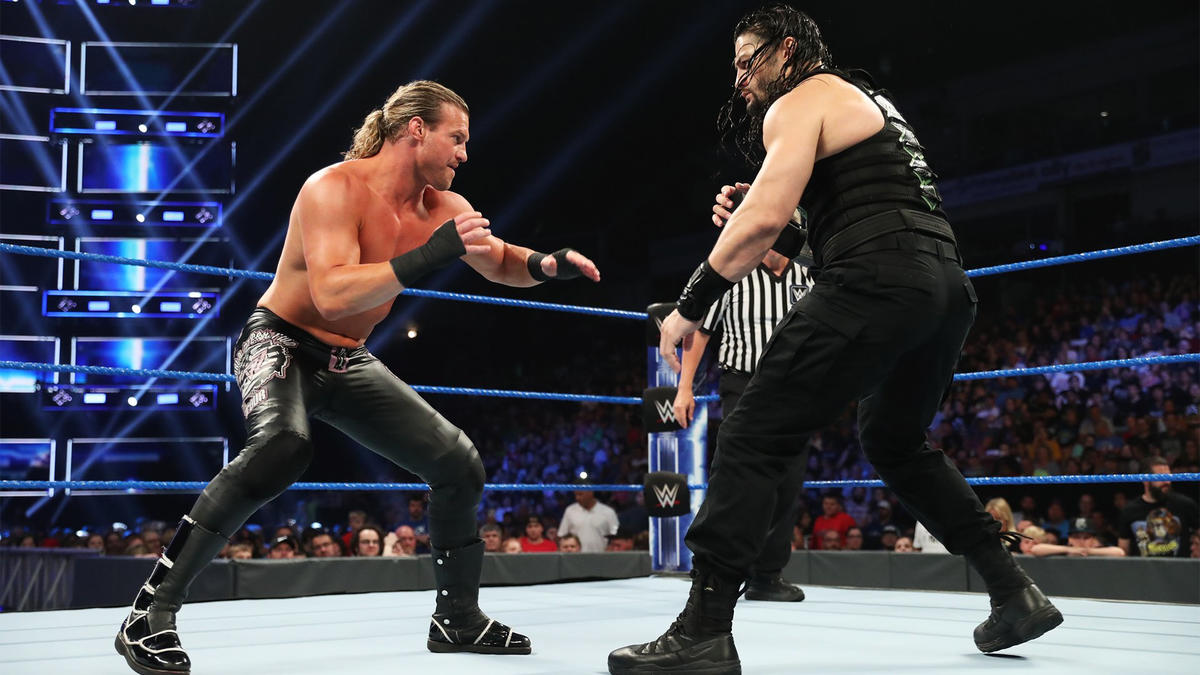 Kayla Braxton is backstage with Roman Reigns. She asks about the craziness of tonight and his match with Dolph Ziggler. Reigns welcomes the craziness and says Ziggler is not ready for him tonight. He also says he and The Undertaker will do their thing on Sunday, which means Shane McMahon and Drew McIntyre will rest in peace.

We go to the ring for tonight’s main event and out first comes Roman Reigns as Greg Hamilton does the introductions. Dolph Ziggler is out next.

They enter the ring and get ready to go but Shane McMahon’s music interrupts. Out comes Shane with Elias and Drew McIntyre. They’re going to watch the main event from ringside. They go over to the announcers and Shane shakes Graves’ hand, but that’s it. Shane then has Hamilton give him a grand introduction. Reigns looks on from the ring as we go to commercial.

Back from the break and the bell rings as they get a feel for each other. Shane is on commentary as Elias and Drew stand next to him. Shane tells them they can get a closer look at Reigns if they want. Reigns takes Ziggler to the corner and breaks as the referee warns him. Drew and Elias have moved closer to the ring for a better look at the action, to taunt Reigns. Reigns works Ziggler around the ring, from corner to corner. Reigns drops Ziggler with a big shot off the ropes. Reigns goes for a Samoan Drop but Ziggler slides out and connects with a dropkick.

Ziggler drops a big elbow on Reigns for a 2 count. Ziggler with more offense in the corner now. Ziggler with a big running splash. He goes for another but Reigns rocks him in mid-air with a right hand. Reigns comes out after Ziggler and hits a Drive By after having words for Elias, who is near Shane. Reigns and Drew have words at ringside now. Ziggler tries to take advantage from the ring. This leads to Reigns getting dropped on the floor after Elias comes from behind to distract him, and Drew shoves him into the ring post. The referee was distracted by Ziggler.

Ziggler with more offense and another close 2 count in the middle of the ring. Reigns finally catches Ziggler with a Samoan Drop and they both are down in the middle of the ring now. The referee counts. Reigns blocks a DDT and levels Ziggler with a clothesline. Reigns with more offense to drop Ziggler into the corner. Reigns looks out at Shane and has words for him before unloading on Ziggler with shots in the corner as fans count along. Reigns with a big boot now. Reigns calls for the Superman Punch as fans pop. Elias tries to interfere but Reigns hits him with the Superman Punch. Ziggler takes advantage and hits the Zig Zag for a close 2 count. Ziggler can’t believe it.

Ziggler cranks up for the superkick now. Reigns gets up and lands a Superman Punch for another close 2 count as Ziggler kicks out just in time. Reigns readies for a Spear but Drew pulls Ziggler out of the ring to safety. Reigns runs the ropes and leaps over the top rope, taking Elias and Drew down on the floor at the same time. Ziggler comes over and drops Reigns with a superkick at ringside. Shane is in the ring now. Kevin Owens hits the ring from the crowd and drops Shane with a big Stunner for a pop.

Fans go wild as Owens escapes back through the crowd. Reigns and Ziggler come back in the ring now. Reigns blocks a Zig Zag attempt. Reigns immediately follows up with a Spear for the pin to win.

– After the match, Reigns stands tall as his music hits. They finished the match just in time as the final SmackDown before Extreme Rules quickly goes off the air after Reigns stands back up from the pin.