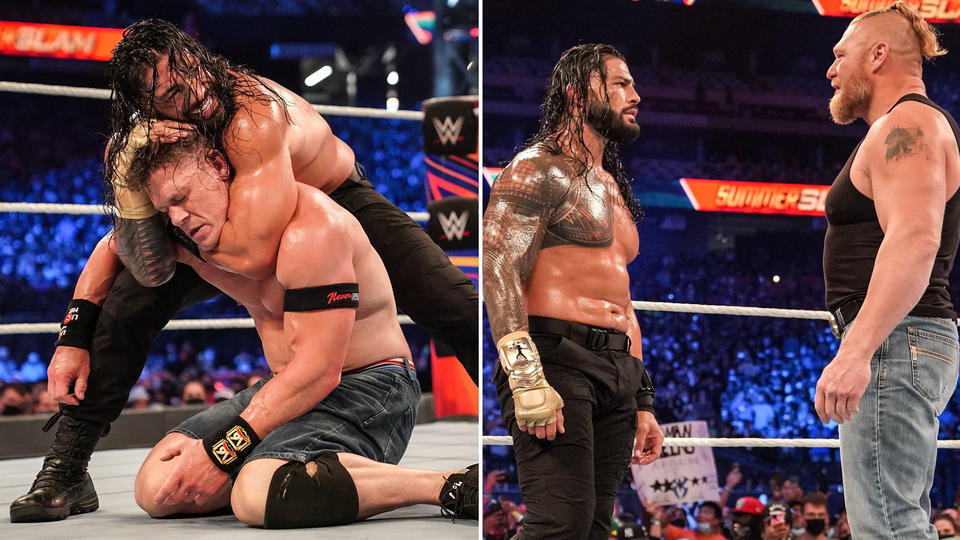 Cena ducks a right hand from Reigns and manages another roll up. Reigns manages to kick out again. Reigns locks Cena in a headlock. Cena tries to get to his feet. Reigns cuts Cena off. Reigns suplexes Cena. Cena kicks out. Reigns tosses Cena into the ring steps. Reigns tells Heyman to give him the title. Reigns poses on the ringsteps with the title.

Reigns tells the crowd that they need him. Cena small packages Reigns. Reigns kicks out. Reigns clubs Cena. Reigns mocks Cena. Cena lifts Reigns up for an AA. Reigns escapes and hits a DDT. Cena fires up. Reigns floors Cena with a right hand. Reigns puts Cena in a sleeper. Cena slams Reigns into the ring post. Cena blasts Reigns with a clothesline. Cena hits the five moves of doom. Reigns turns the five knuckle shuffle into a guillotine. Cena floats over into a pin. Reigns kicks out. Superman Punch by Reigns. Reigns tries a Spear but Cena boots Reigns in the head. Five knuckle shuffle by Cena. Cena hits the AA. Reigns kicks out.

Cena locks Reigns in the STF. Reigns gets to the ropes. Reigns rolls out of the ring. Cena follows. Reigns surprises Cena with a drive-by. Reigns tries to Spear Cena outside the ring but Cena lifts Reigns up and hits an AA on the commentary table. The table explodes. Cena tosses Reigns back in the ring and attempts a pin. Reigns kicks out. Cena dives off the top into a powerbomb by Reigns. Cena kicks out. After a series of counters, Reigns lands another Superman Punch. Cena kicks out. Reigns calls for the Spear but Cena side steps. Reigns crashes into the ring post. Cena hits a Super AA! Reigns kicks out again! Cena mocks Reigns and goes for a Spear. Reigns kicks Cena in the head. Reigns and Cena trade strikes. Reigns hits another Superman Punch. Reigns hits a Spear for the win.

Following his win, Reigns began to celebrate in the ring before Brock Lesnar’s music hit. A stunned Reigns watched as Lesnar came out, sporting a brand new look complete with a ponytail and beard, and marched his way down to the ring. A visibly scared Paul Heyman stood behind Reigns as Brock climbed into the ring, facing down Reigns before watching as Reigns walked off, signaling that Brock is now back and looking for his next title opportunity.