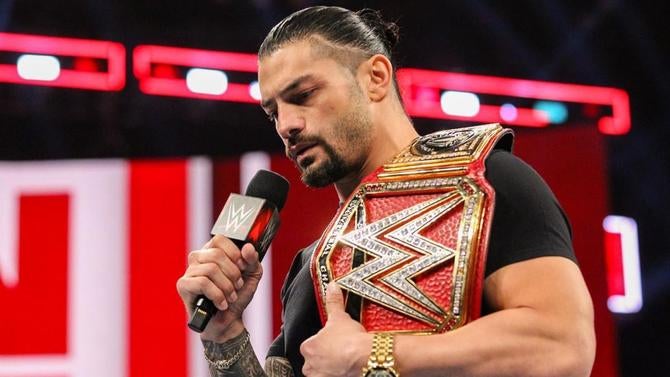 On Sunday night, WrestleMania 37 will conclude its two-night extravaganza with a main event featuring Roman Reigns defending the universal championship against Edge and Daniel Bryan. The match is one of the most unlikely in the decades-long history of the biggest event WWE has to offer.

All three men have previously faced health situations that have left them to face a life without wrestling. After more than a decade in remission, Reigns, real name Joe Anoa’i, was forced to vacate the universal title in 2018 when he found himself in a battle with leukemia. He would return to action in 2019 when the cancer again went into remission. . Bryan, real name Bryan Danielson, suffered a series of concussions that forced him into an official retirement in 2016. It would take more than two years of evaluations and persistence before he was finally cleared for in-ring competition in 2018.

Reigns’ time away from wrestling was much shorter than that of his two opponents, with a stunningly quick turnaround from stepping away due to leukemia to returning in under a year.

Even with that, he suggested that there is something of an unspoken bond between the three men, rooted in all experiencing having had wrestling taken away from them in cruel, unexpected ways.

“To be honest, I don’t think I’ve ever really focused on it,” Reigns said. “I think that’s just due to the experience. I think where we can all be connected and you can parallel all of our mindset is that we are all thankful for today and the opportunity that comes with today. I think in all of our own ways, we’ve experienced that feeling when it’s not there. We’ve all woken up and the show went on without us. While we haven’t all sat down and talked about it, there’s a weird connection and chemistry. I’m not sure if they feel the same way or have experienced the same thing, but I can feel that through them. I can feel that gratitude, that gratefulness of having the opportunity to wake up and do what we love outside of our families and our children and our wives. We all deeply appreciate the opportunity to have the health to wake up and be physical beings, to be athletes, to be storytellers. There’s not a form of entertainment like we do where you exercise every sense, every emotion, everything from the feel, touch, smell — everything is a part of our show. That’s where we are deeply connected.”

For Edge, real name Adam Copeland, the journey was even longer. In 2011, Edge was forced into retirement when he began to feel numbness in his arms after a previous cervical vertebral fusion. Doctors told him that continuing to participate in wrestling matches could result in paralysis or death. It wouldn’t be until the 2020 Royal Rumble when he appeared as a surprise entrant into the match that Edge set re-entered a wrestling ring as a competitor.

Even with their similar experiences, all three men told CBS Sports that they haven’t sat down to discuss the improbable nature of now main eventing the biggest event of the year.

“We haven’t, and I’m sure there will be that moment, but I think it will be before or after that match when you can hear the crowd roar and know it’s really happening,” Edge said. “Right now, nothing feels real. That aspect of that thing is there with three guys who, at one point or another, thought that could be it. If you look at that aspect of the story, it’s hard to hate any of the characters, and that’s a part of our job. If you’re looking at this from the aspect of Joe, Bryan and Adam, we’re three guys who thought at some point that this would never happen again. That’s kind of crazy. It really is. I think we’ll have a moment to really sit and reflect on that, but it might not be until after the match. Then it will be like, ‘OK, we got that done. We did it. And there was a time we thought we’d never be doing it.’ That’s pretty special.”

Bryan will watch his wife, Brie Bella, inducted into the WWE Hall of Fame on Tuesday night. That, he said, not his own journey back to the main event of WrestleMania, has dominated much of his thinking.

“What’s weird is that it’s crossed my mind, but I’ve not actually done any deep thinking about it. No deep appreciation of it,” Bryan said. “That’s something that needs to happen for myself. So many things in life go by so fast, right? Now, my family — and I’m sure all three families — are in this stage where as COVID stuff is getting lifted, that means my wife is busier and she’s also going into the Hall of Fame. We’re like ships passing in the night sometimes with coming and going with the kids and all that kind of stuff and the travel and all that stuff. Sometimes, you get too caught up in not truly appreciating how amazing it really is.

“I’ve taken a couple moments to appreciate how great it is that my wife is going into the Hall of Fame — that’s super cool for me as a husband and I’m very proud of her for that. I’ve taken a little bit less time to appreciate that, hey, I’m going to be in the main event of WrestleMania again. It didn’t seem like it could have been a real thing for me just a few years ago. And then really being able to reflect on two guys who I have an immense amount of respect for and the three of us being in it. I’ve thought about it for a second, but never sat down and deeply appreciated that it’s happening.”

Between Edge and Bryan, it was the latter whose retirement came later and return came earlier. Edge had hung around the fringes of WWE after his retirement, participating as a special guest on occasion and being one of the stars of a WWE Network comedy show with longtime friend and tag team partner Christian.

When Bryan made the emotional announcement of his return, the moment passed Edge by without giving the Hall of Famer so much as a whiff of hope that his own return to the ring would follow just years later.

“I didn’t watch the product, so I didn’t see any of a lot of stuff for a while,” Edge admitted. “I can look back now and say it was kind of like a mourning phase after having this thing ripped away from me. It took time. It really did. In that time, a lot happened that I missed and that was one of the things I didn’t see. I know every injury is different, right? I heard he was cleared to come back, but his were concussion issues. I know that a spine and a concussion — or leukemia — are very different things. So you can’t get too wrapped up in, ‘Oh man! That guy made it back!’ They’re just different cases entirely. I was happy for him because anytime that you can get this thing back, this thing that you love and this thing that it’s all you ever wanted to do — and that’s the case with Daniel Bryan — that makes you smile. But it never set the wheels in motion for me or anything.”

Edge would follow up his 2020 Royal Rumble appearance by moving immediately into an on-screen feud with former tag partner Randy Orton, leading to a showdown at WrestleMania 36 and a rematch at Backlash that WWE had billed “The Greatest Wrestling Match Ever.” In filming the match ahead of the live Backlash airing, he suffered a torn triceps and was again on the sideline.

The injury did not put any doubt in Copeland’s mind over his decision to return as in-ring talent, however. If anything, he was amazed that his neck wasn’t what put him on the shelf.

“I was like, ‘Well, this is what it is,'” Edge said. “Now I’m 47 and asking my body to do this and we’re having a 48-minute match. You know I’m going zero to hero, right? So there may be some fallout in that. For me, I just thought, ‘Wow. It’s not my neck. That’s amazing.’ That’s really how I had to look at it. More than anything, I was still coming to terms with the pandemic and performing in front of no one. To me, that was far bigger, like, ‘Do I want to do this without an audience? Did I come back to do this just to do this without an audience?’ That’s just selfishly looking at that one aspect because I know there are far bigger fish to fry than jumping around in tights. To me, that was the aspect of that this is the most fun part of this job — having that audience participation and back and forth. That has been gone. Is this fun anymore? That was more the question. But the injury? Nah, I’ve done worse than that.”

For Bryan, the experience of seeing a fellow legend return was much more positive. He was, after all, already back in the ring and doing what he loved. So to see Edge get the opportunity to lace up the boots and make another run was nothing but a positive experience.

“You know what? It’s weird,” Bryan said. “I don’t want to say it’s more joy, but it’s a different type of joy when you see somebody else able to do it and you get to be so happy for them. I know from my perspective, seeing him do it made me … so, when I got cleared, it was Monday night and I had just done the Bahrain Comic Con and I was in the Middle East and I flew to Pittsburgh. I landed late and went to [WWE Medical Director Dr. Joseph Maroon’s] office. I’d done so many tests before, but they had to do the crossing your T’s and dotting your I’s type of things. Dr. Maroon had already left, but he left me a note and at the end it just said, ‘Finally. You’re cleared.’ I literally cried most of the way back to my airport hotel, got on a plane the next morning, flew to Texas, announced that I was cleared to wrestle again. I think I got powerbombed on an apron or something, you know how it goes. But it was super, super emotional and this roller coaster of things.

“When it happens to somebody else, it’s not a roller coaster. There’s no roller coaster with them. It’s just pure joy. I didn’t even know it was going to happen or was close to happening. He had triple fusion on his neck. I don’t know of any athlete who has come back from that. When he got cleared it was just, ‘Oh my god! That’s awesome!’ It’s just different feelings when it’s someone else because you’re not dealing with the downs, you’re just there for the big hooray at the end.”